The Story of Tin Ceiling Tile & Its American Roots

Tin ceiling tiles are 100% an American innovation. They were born in the U.S. from the need to have a more durable and affordable version of European plasterwork ceilings. It didn't take long before they became a stand-alone design element.

Pressed tin tiles came into the height of popularity between 1880 and 1940 in the U.S. There were about 45 American companies making tin ceiling tiles at this time. They used two interlocking dies to stamp out intricate patterns in steel sheet metal plated with tin. The process required special training and as a result, specialty craftsmen have always been associated with tin tiles. To this day, you can still find artisans using this same process.

Here's a little more of the story behind tin ceiling tile and its American roots.

A Tradition of Local Transport

At the height of tin ceiling production (1880-1940), nearly all of the companies manufacturing tin tile were located along major railroad routes. It was easy, inexpensive, and fast to ship the product to contractors.

This reliance on railroads supported industry in America and allowed for expansion of this and other industries in the U.S. As technology was developed that enhanced processes in making tin tile, it was natural to combine with machine companies that could increase production. It was smart to partner with powder coat companies that could boost the durability of the tin tiles.

Railroads also made it easier for tin tile to be shipped all over the world. Direct access to railroads connected even Mid-Western tin tile companies with ports that could deliver tin tiles anywhere in the world.

The very idea of tin tiles began with trying to find a way to make a European design more accessible to Americans who didn't have access to Europe's plaster artisans. If anyone could find a way amid limited resources, it was American ingenuity and bootstrap mentality.

Stamped metal made the look more accessible financially and more durable than plaster. In fact, tin tile was much lighter, fireproof, easier to clean, and lasted longer than its counterpart. There was a surge of tin tile in churches, government buildings, homes, and retail across the country. 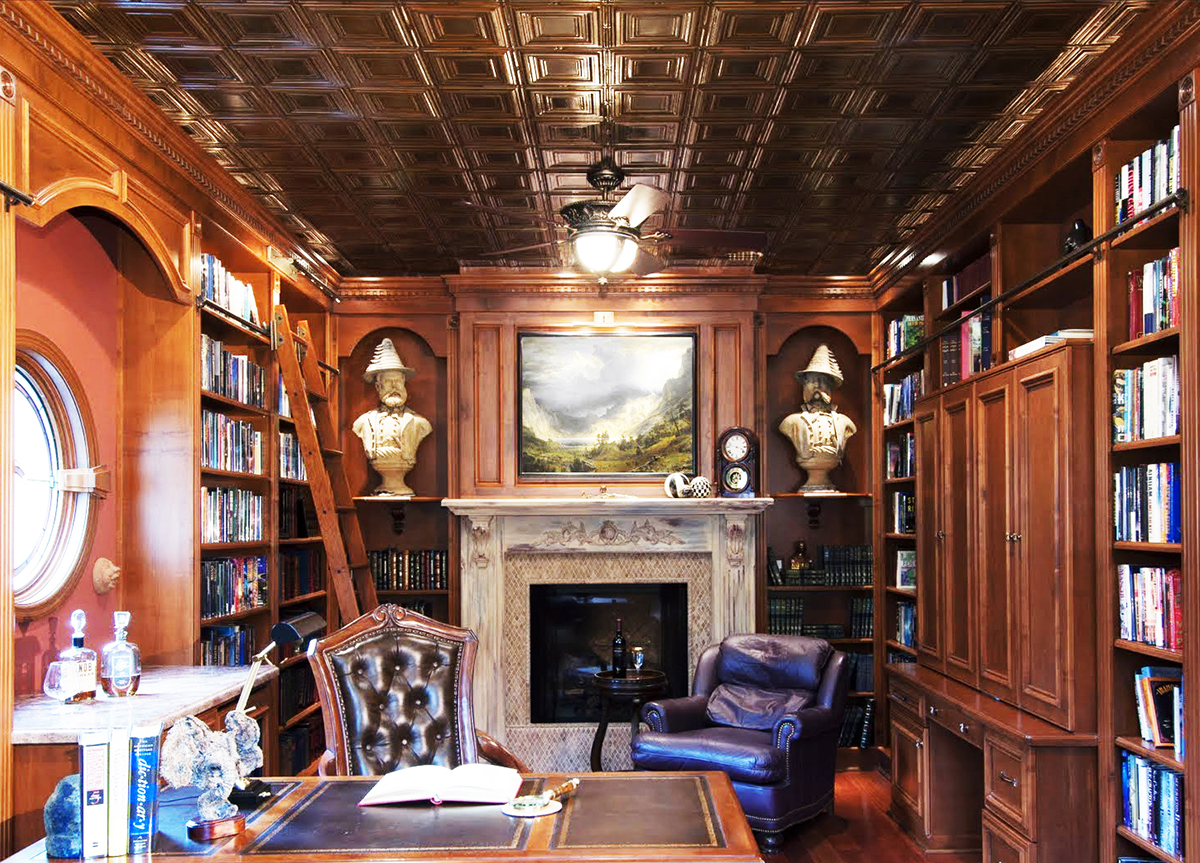 After 1940, the popularity of tin tiles declined sharply. This was due to World War 2 when the need for steel and tin was greater elsewhere. Many Americans wanted to do their part to help in the war effort so luxuries like tin ceilings were out.

It wasn't long before the U.S. remembered and began demanding pressed tin for their ceilings once more in the 1980s. Restoration projects came into vogue. Preservation of existing tin ceilings included sending samples of vintage ceiling tiles to manufacturers to replicate the original patterns.

By 2002, American Tin Ceilings opened up, and continued encouraging designers and demolition workers to send in samples of historic tin tiles so they could be recreated for a new era of design.

All our manufacturing is done right here in the USA. We acquire metal, make molds, stamp, and finish our products in the U.S. We continue to provide stand-out craftsmanship and personal customer service while keeping costs low, as was originally intended by the inventors of tin tile.

We make more than 40 patterns (many of them historically accurate) in 50+ colors that are just as at home in a modern design as they are in a Victorian one. American Tin Ceilings is proud to be a part of the story of tin ceiling tiles, an American success story.