Use code ATC15Silver for 15% off Silver Colors* Details

Use code ATC15Silver for 15% off Silver Colors* Details

The historic preservation of a well-loved Mississippi schoolhouse into multi-family retirement housing was no small task. Keeping the building on the historic registry and making it a livable space required the cooperation of a team of experts. A design that drew on the original finishes (like historic tin ceiling tiles) was absolutely necessary. The end result? A building that retains the memories of the past but has plenty of room for memories yet to be made.

How did the idea arise to convert an old high school into multi-family housing?

Several factors made this site an excellent candidate for us. The City Of Hattiesburg and the Hattiesburg Downtown Association have worked diligently to revitalize the area and we had the same vision. The partnerships we forged have been very instrumental to this redevelopment. The structure is gorgeous and I have heard this effort described as... She [the building] has good bones! She has fought hard to stay through Hurricane Katrina, several tornados and a fire. She deserves to live. These older schools hold such history and we are so very proud to be able to preserve this one!


Hattiesburg and particularly downtown Hattiesburg has become a retirement destination with the University of Southern Mississippi in close proximity. There are also many restaurants, churches, and other civic buildings near the site and within walking distance. The site and building itself will allow for exterior seating areas, both public and private.

What can you tell us about this project?

Preservation Crossing consists of seventy-four (74) elderly units within the three story structure. It is made up of fifty-six (56) one bedroom units and eighteen (18) two-bedroom units. Because the building is converted from its original use as classrooms, the square footage varies with each unit.

What was the project scope?

In order to convert this structure into affordable housing, we had to make several adjustments and creative changes within the original footprint. The building is made up of two separate structures built years apart. The original school was located in the rear of the property and was built in 1911. As Hattiesburg grew, the school had to enlarge so another building was built in 1921 in front of the 1911 structure and the two buildings were joined together by stairwells on the west and east sides. 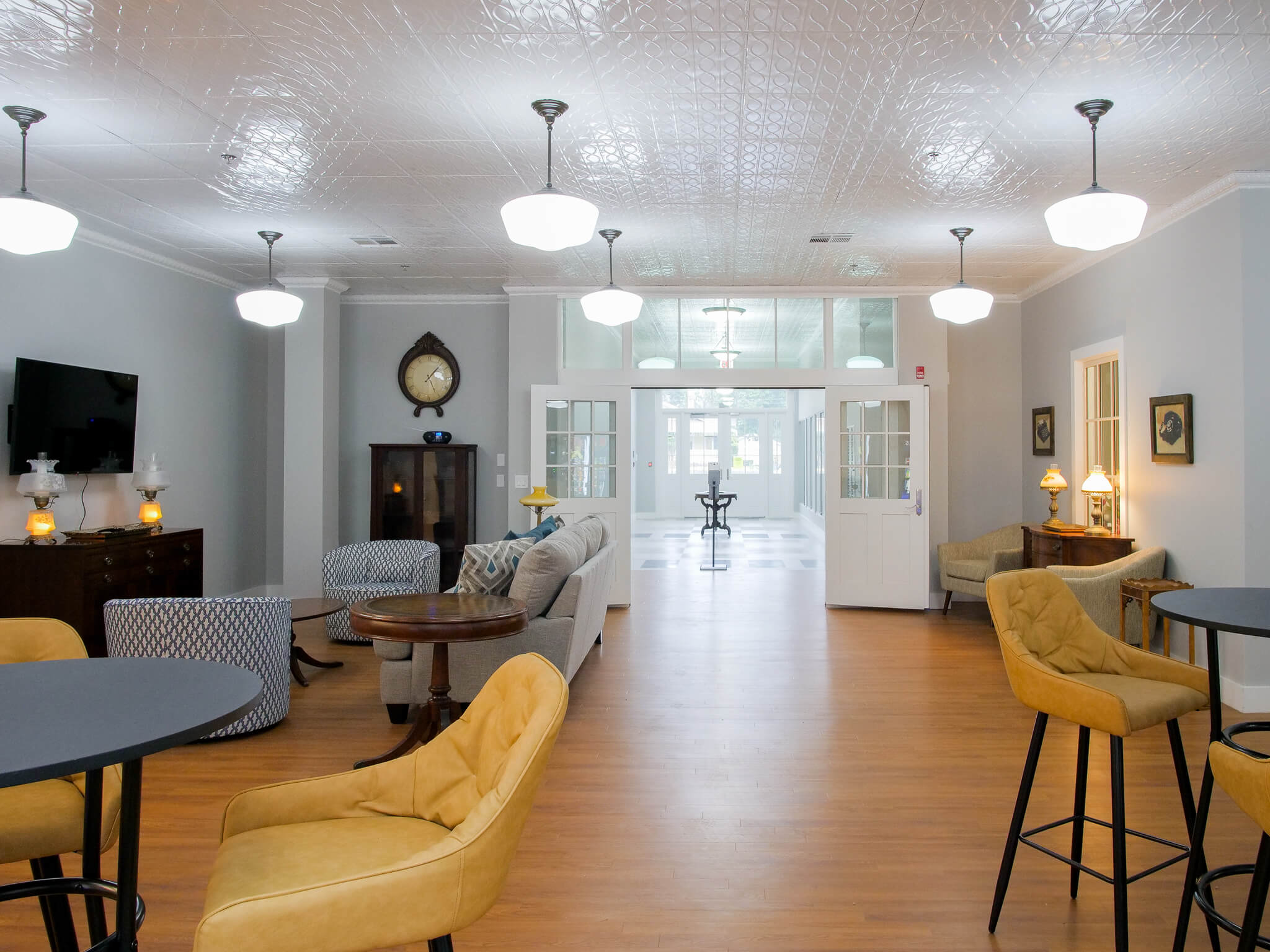 The toughest battle with this scope had to do with the 1911 building and the fact that it had been open to the natural elements for years with little to no product remaining that was able to be utilized, thus causing the scope to consists of new materials that were to be like the original and had to be approved by the MHAH (Mississippi Dept of Archives and History) and NPS (National Park Service).


In order to allow for all of the exterior windows required to maintain the historic nature, we were tasked with creating many more unit types within one project than we have ever had. This produced many unique floor plans varying in size that the tenants will be able to choose from. Aesthetically, and again to maintain the historic features, we were charged with matching the historic wood windows with a highly energy efficient modern wood clad window. After multiple submissions and meetings with the National Park Service and State Historic Preservation Officer, we were able to agree on a window that matched the 1911 and 1921 windows and met the energy requirements of the Mississippi Home Corporation and National Green Building Standards. 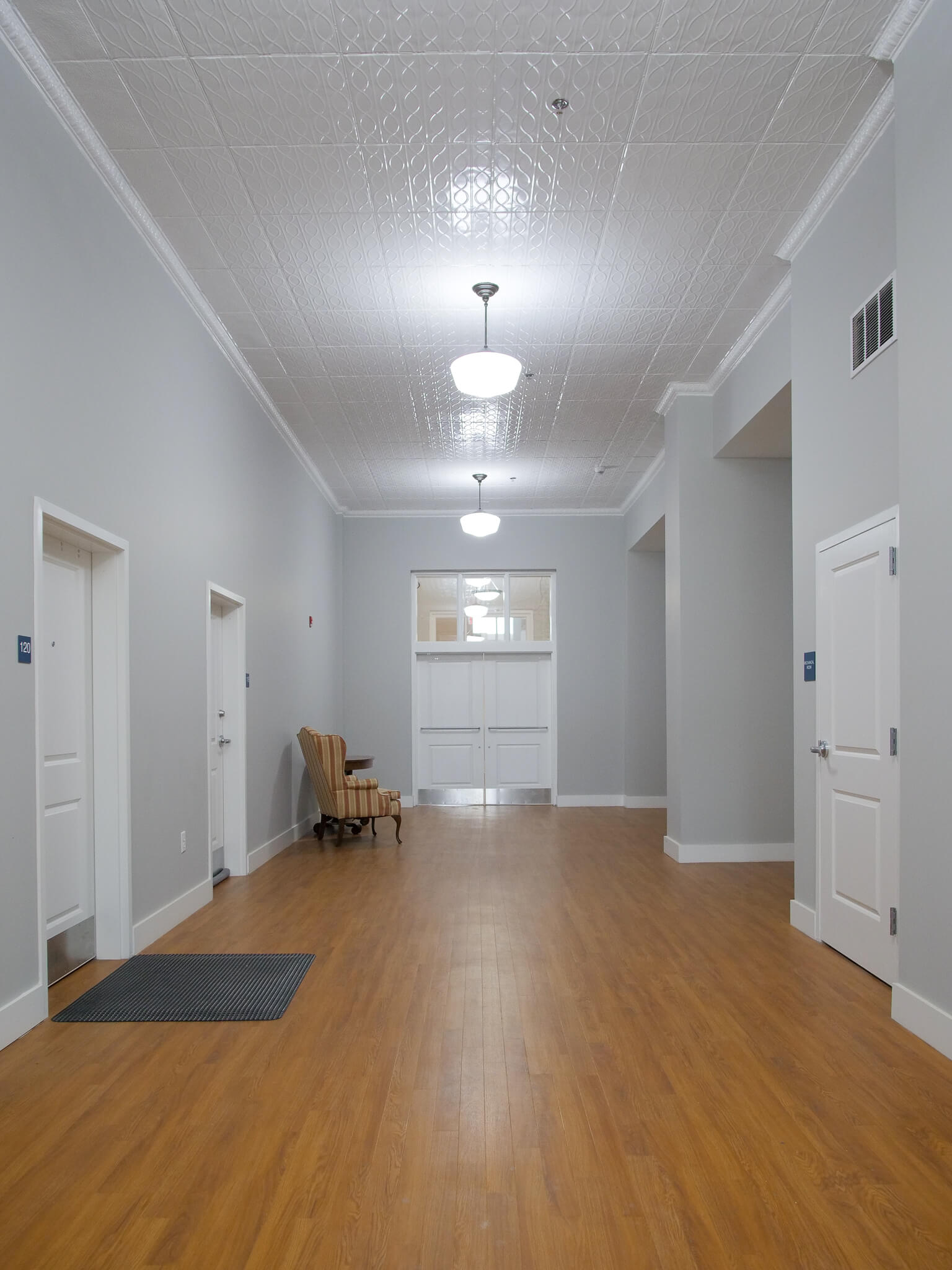 The negatives were obviously the challenge of fitting 74 affordable apartments into a 100 year old school building with large classroom layouts, with no roof, and full of bats. The many different floor levels of the building was also a challenge for accessibility.


The many positives include first and foremost the protection and conservation of a city, state, and national landmark while creating affordable housing for seniors. The adaptive reuse projects require much more of a team effort than our typical project with constant collaboration between Owner, Contractor, Architect, Consultants, Building Officials, and State Agency representatives. We have done a great job with that on Preservation Crossing.


What has been the community response to the project?

The response from the entire area has been overwhelmingly supportive and welcoming. Many residents were connected to this building by either attending school here themselves or a family member had attended. We have residents every day just come by to take a tour. 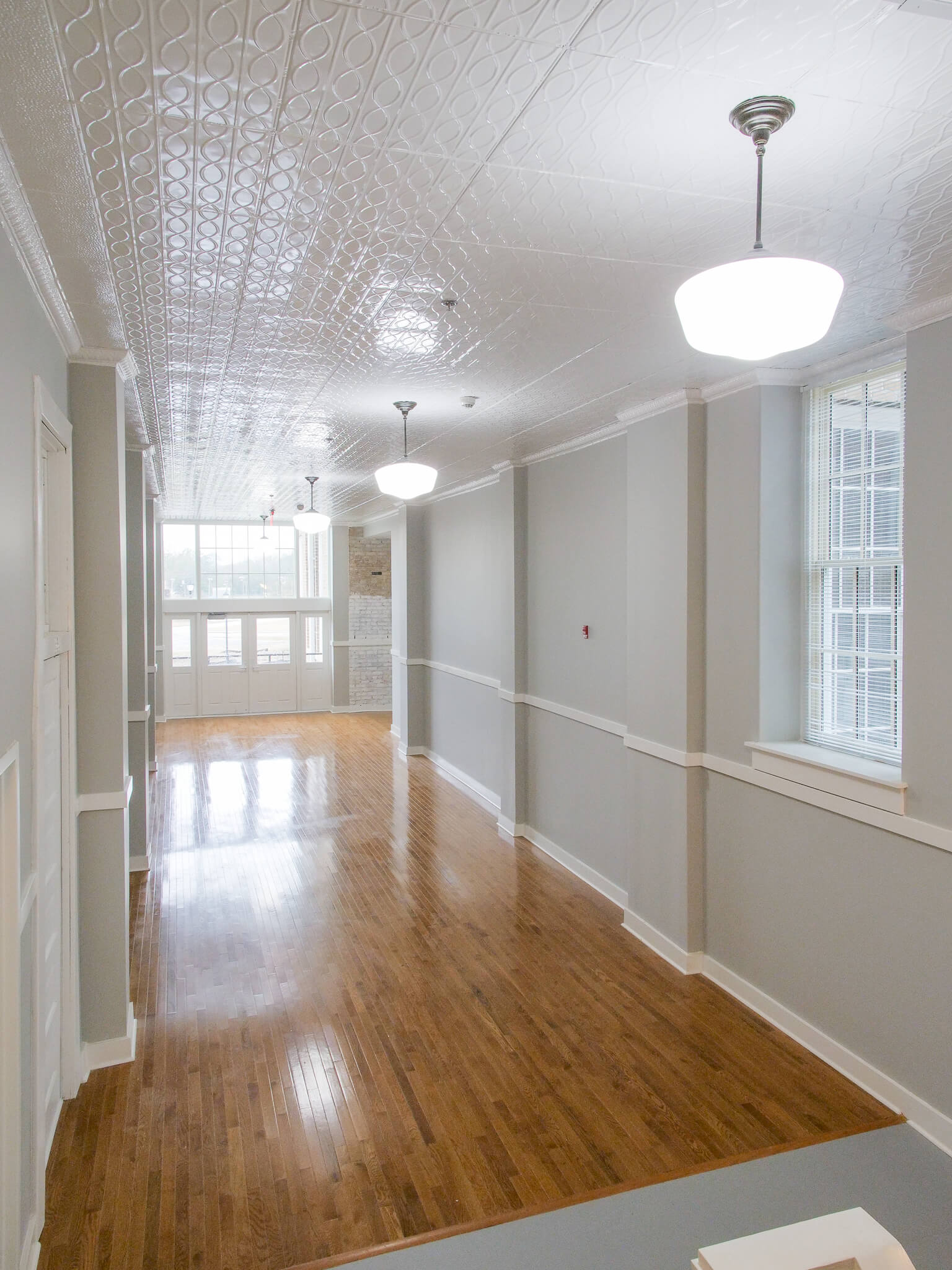 How would you describe the design style of this project?

Being that this was originally a schoolhouse, there were large classrooms throughout. We were able to design units within the frame of the buildings but were tasked with the job of successfully fitting the units to the windows in a way that they would be within the regulatory requirements of the appropriate housing entities. The halls/corridors were to remain in tact and the units had to be designed around them. Being a historic preservation, every detail of this development had to be specific to the time period of which it was built.


How do tin ceilings support the design style?

This project was a Historical Restoration and one of the items noted to restore were the existing tin ceilings, unfortunately due to the condition of what tin was remaining they were too badly damaged and were not salvageable. So instead we were approved to go back with a new ceiling tile that resembled what was existing. 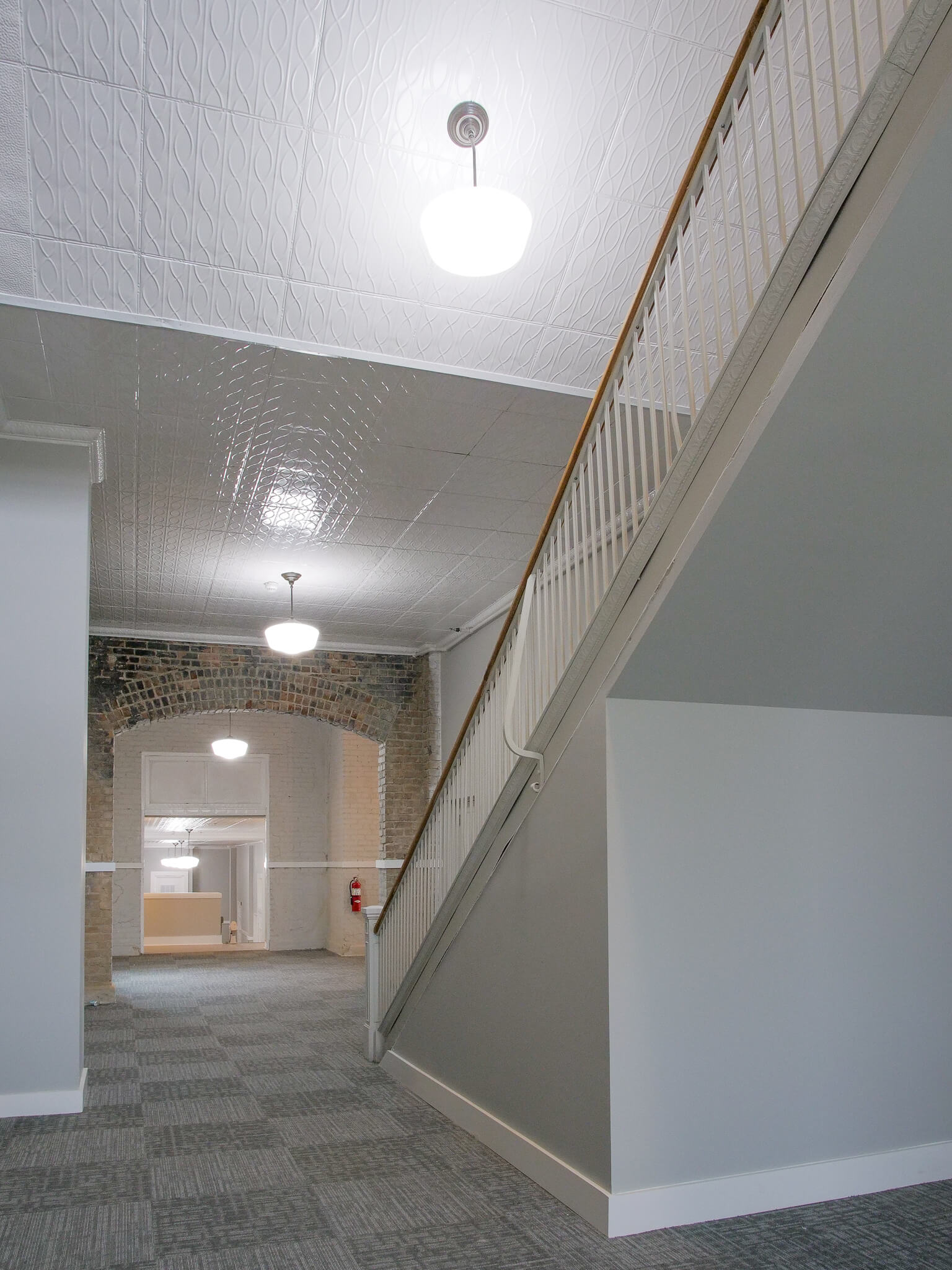 Why did you choose Pattern #38 in Bright White Satin?

You can see from some of the attached pictures Pattern #38 was very close to the original tin used in this building and was approved by the Historical consultant. 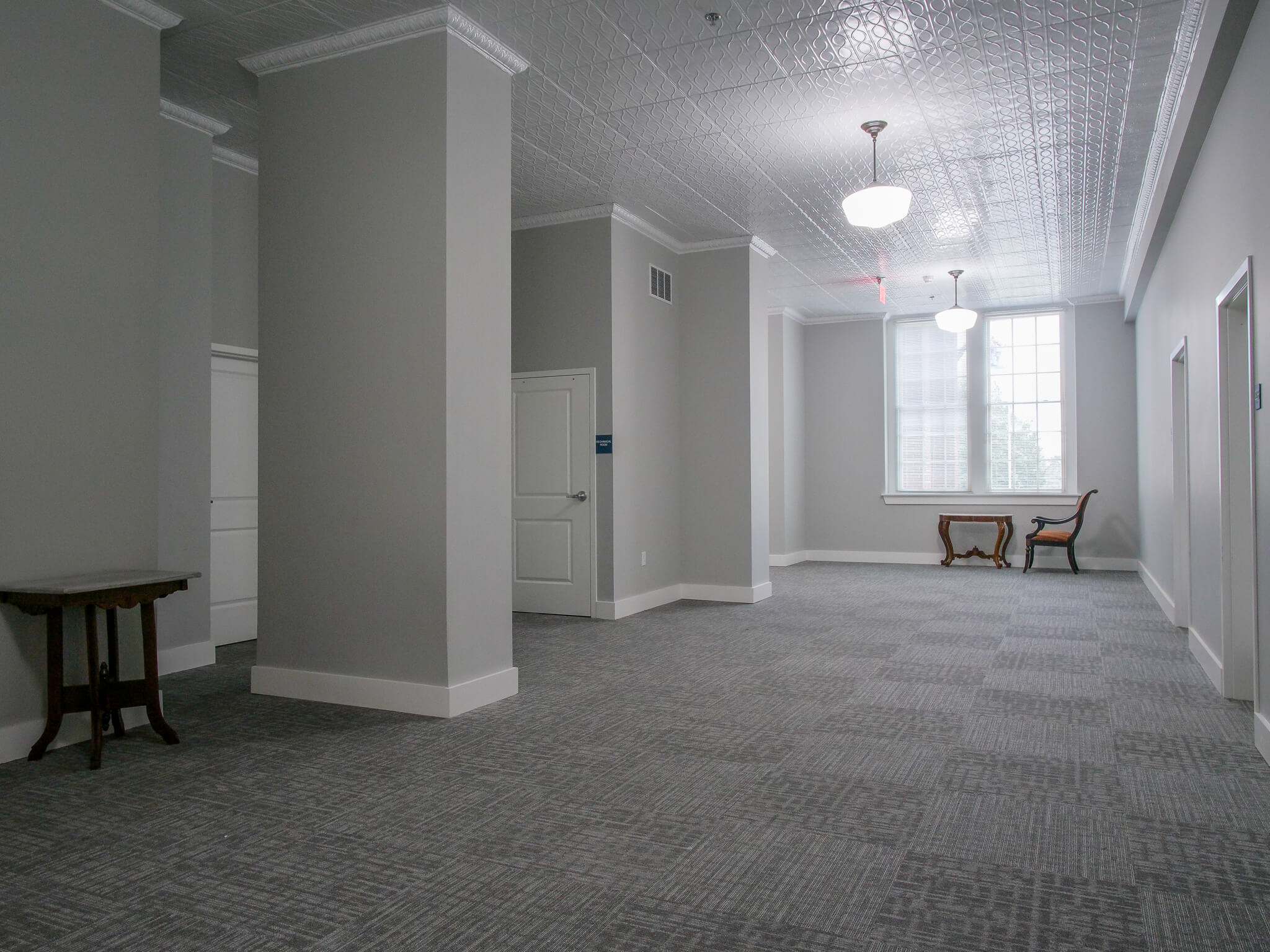 What led you to purchase tin panels from American Tin Ceilings?

The Best Alternatives to Wallpaper

The 4 Biggest Kitchen Trends for 2023

A Creative Take on Campus Dining